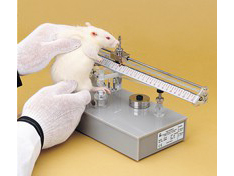 The 57215 Analgesy-meter is the classic device to perform Paw Pressure experiments according to the method of Randall-Selitto. The force is applied to the animal’s paw, which is placed on a small plinth under a cone-shaped pusher with a rounded tip, which does not hurt the animal. The operator depresses a pedal-switch to start the mechanism which exerts the force; when the rat struggles, the operator releases the pedal and reads off the scale the force at which the animal felt pain. Additional weights are provided, to increase the force range.

The Paw Pressure Analgesia Instrument is for the Randall-Selitto Test, which requires the application of increasing pressure on the paw between a flat surface and a blunt pointer. It is usually used with animals with one paw inflamed, and one untreated paw, to evaluate drugs for analgesic action.

The device exerts a steadily increasing force (16 grams per second) on the rat paw until the animal makes a stereotyped flinch response. The researcher releases a foot pedal to stop the force indicator. The electronics measures the time interval between the start of the slide motion and the moment the slide is stopped by the operator and converts time into force.

The force is measured on the scale calibrated in 10-gram steps, by a pointer riveted to the slide. The scale can be multiplied by 2 or 3, by placing one or two disc weights on the slide.