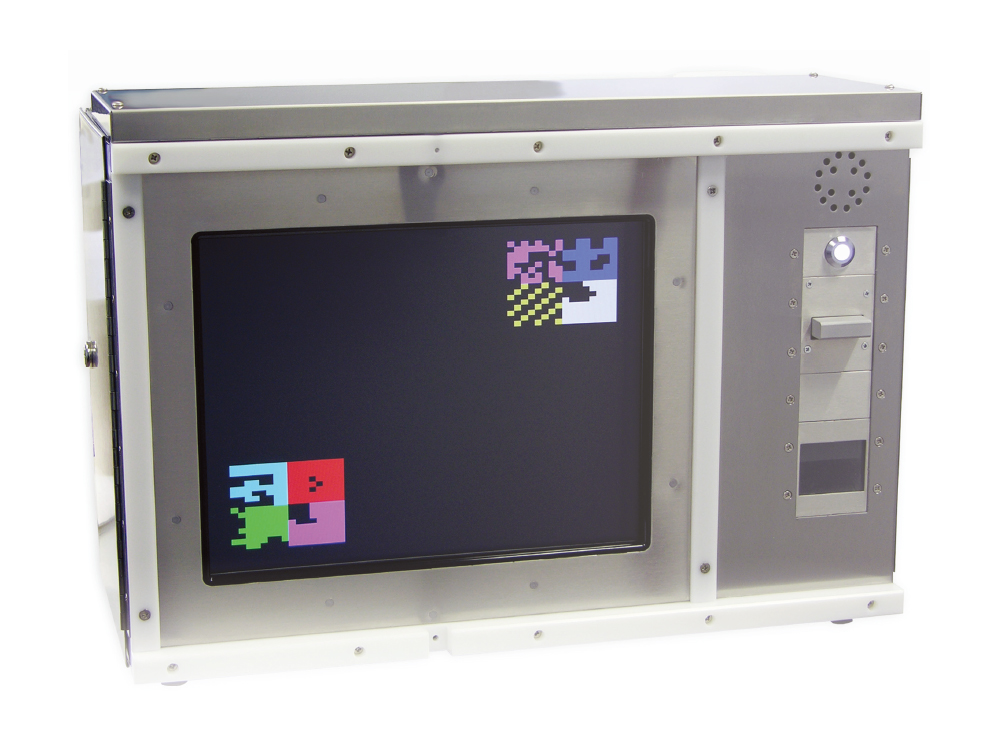 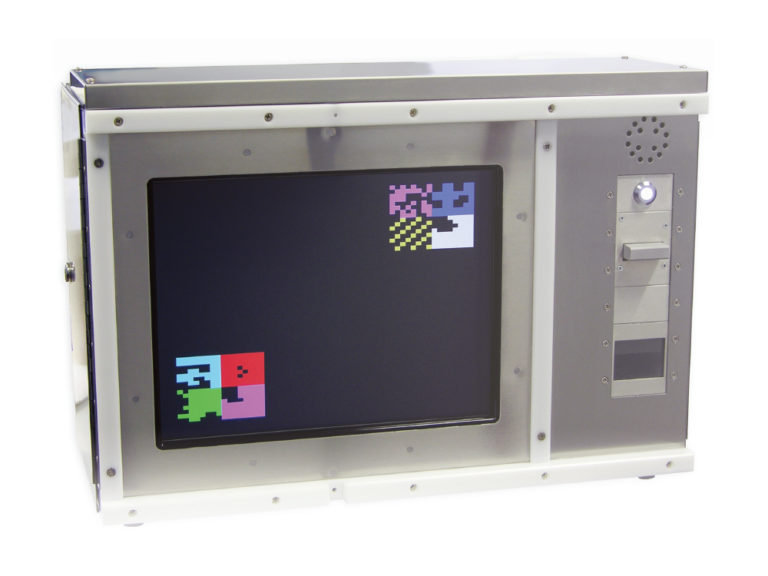 The Cognitive Testing System, Model 80950, was developed for non-human primates and has been a part of the Lafayette Instrument touch screen product line since 2004.

This test station retains all the test specific criteria, stimulus presentations, and animal response hardware.The system houses an Intel® 1.6 GHz CPU processor. Custom software allows for remote operation of a single unit or multi-station setup connecting the stations with a standard Ethernet cable. With multiple units, a network of test labs can tie into one another or into an existing network.

Optional packages are available with support in meeting your research configurations as needed. Connect an optional keyboard, monitor, and computer mouse directly to the test station as an alternative to run independently, eliminating an expensive multi-port interface.

The CANTAB and WhiskerServer® software license is now sold per station to keep the startup cost within the research budget.

The Model 80951 Intellistation™ Liquid-based reward is favored by users working in Marmoset monkeys, but can still be used by researchers working with other non-human primates, although, for Rhesus Monkeys we would recommend replacing the 80661 lick tube with the sturdier Model 80662B or Model 80663B Lick Tube.

If a system with both pellet and liquid reward is needed, we recommend beginning with the 80950 Pellet Reward test station and add one additional lick tube.

• A calibrated peristaltic pump with 12.2ml flow rate and receptacle

• Speaker to reproduce audio cues to the subject

The Monkey CANTAB application portfolio is comprised of a test battery performed via a touch screen. Batteries are flexible and can be configured by the user. Multiple tests may be linked in the same subject session. Systems may be provided with pellet reward (recommended for the Rhesus monkey), liquid reward (recommended for the Marmoset), or both.

• Each trial begins with a Marker 1 sound (optionally, following an initiation response).

• The first response to a stimulus is registered, and the subject receives reward/punishment accordingly (or, if it fails to respond, an omission occurs and is punished).

The stimulus can appear briefly or for as long as the subject is allowed to respond.

The stimulus (like any in MonkeyCantab) can be a blank stimulus. This allows the task to be used as a two-choice vigilance task, as

• two stimuli are used; one visible, one blank (invisible);

• the stimuli appear briefly, then the manipulanda appear;

• the subject must respond (e.g.) left for the visible stimulus, and right for the “non-stimulus”

• Each trial begins with a Marker 1 sound (optionally, following an initiation response).

• Stimuli appear in various locations on the screen. Some stimuli are correct; some are incorrect.

• The first response to a stimulus is registered, and the subject receives reward/ punishment accordingly (or, if it fails to respond, an omission occurs and is punished).

The task is composed of a series of stages. Each stage defines a target and nontarget(s), and specifies their proportion (sometimes grouping trials into blocks that are approximately imperceptible to the subject). Stages can have a passing criterion, and if the stage is passed (e.g. success on a certain number of trials within a certain time limit) the task progresses to the next stage. Individual trials simply consist of presenting a stimulus (target or nontarget) and seeing what the subject does. Reinforcement options are configurable.

Originally based on Evenden JL, Ryan CN (1996). The pharmacology of impulsive behaviour in rats: the effects of drugs on response choice with varying delays of reinforcement. Psychopharmacology 128: 161–170.

A number of types of task are possible with this program. The trial structure of a typical delayed reinforcement task, albeit using operant chambers rather than touchscreens, is shown below (taken from Cardinal et al. 2001):

Likewise, the trial structure of a typical probabilitybased task is shown below (taken from Cardinal & Howes 2005):

• Each trial begins with a Marker 1 sound.

• The subject may initiate a trial (and subsequently respond) by pressing (and then releasing) a lever, or by touching (and later releasing) a stimulus on the screen, or by pressing a lever to initiate the trial and then touching the target to respond.

• Following initiation, the target area appears on the screen.

• After a configurable delay, stimuli start to appear in the target area. The subject must watch for the target stimulus. Before it appears, there is usually a series of distractor stimuli that must be ignored.

This task is a variant of the normal D(N)MTS task. Suppose you want to test many long delays (e.g. 5 minutes, 10 minutes, and 15 minutes). In the conventional task, in which SAMPLE and CHOICE phases are paired, this would be slow, but the task could potentially be run in a more time-efficient manner, also requiring the subject to memorize several samples at once.

The aim of this program is to train the monkey to touch a solid box that is presented anywhere on the computer touch screen.

• Up to seven box sizes

• Boxes may be one of seven colors

• A touch outside the box restarts the trial

This platform tests the short-term memory using a non-repeating sequence of arbitrary symbols. It is analogous to the use of junk objects in the Wisconsin General Testing Apparatus. The symbols used are the same as the stimulus used for the human CANTAB Delayed Match to Sample Test.

This task is analogous to Lenonard’s Five-Choice Serial Reaction Time task, which is based on the Continuous Performance Test of Rosvold and Mirsky. The subject is presented with a tone (optional) and a set of empty target stimuli (typically five open circles) to signify the start of a trail. The subject makes a response by pressing a key or a screen stimulus.

After a delay, a target stimulus is presented for a specified duration in one of five places (e.g. a filled circle appears within one of the five open circles). If the subject touches the filled circle or the place where it was presented, it is reinforced: incorrect responses are punished. Accuracy of the response and the reaction time is recorded.

• Minimum key-holding time can be independent or locked to delay

• Frequency of stimuli between positions may be varied

• Both TRAINING and TESTING modes of operation are provided

This conditional memory and learning task, located in the trial-unique patterns, must be learned and remembered. Human variations of the test are sensitive to changes in the early on-set of Alzheimer ’s disease.

• Novel patterns on every trial

• Each trial repeated until correct (changes order of presentation)

• Each session can have multiple (progressive) stages

This set of visual discrimination and reversal tests can be used to study a range of cognitive processes which include:

• Simple associative learning: learning that a response to a particular stimulus is associated with reinforcement

• Selective attention: learning to attend selectively to a particular dimensional property of the stimulus

• Attentional set-shifting: learning to shift attention from one dimensional property of another stimulus

• Optional change of color on response

This platform provides a test of functioning memory analogous to that tested in rodents in an 8-arm maze. Boxes appear on the screen with on obvious pattern, and the subject must select each box in turn without revisiting a box already touched.

Options are available for training the subjects, and for varying the difficulty of tasks:

• 16 possible positions, four in each quadrant of the screen

• Each trial may have one to 16 boxes

• Box positions may be random or specified for each trial

• The number of boxes in randomized trials can be increased in blocks.

• Screen may be blank for any amount of time when touched

• A number of possible colors and shapes for stimulus

• Both initial and secondary colors can be specified for each trial

This package includes the CANTAB test applications and the basic Whisker® Multimedia Suite necessary to run those applications.

These translational tasks are based on well-established human tests. Alteration from human tests have been kept to the absolute minimum, consistent with the ability in non-human subjects that learn the tasks. The sensitivity of the tests and the direct comparison with human results

makes this Monkey CANTAB best for:

• The development of new and improved animal models with brain disorders

• Early identification of progressive disorders, whether endogenous or as a result of environment

Many of the tasks are also now available for rats and mice.

Whisker® Multimedia is a software suite designed to control devices for behavioral research.

Programmers licence for Whisker that allows Whisker to be programmed in a variety of languages. Tools are available for C++ and Visual Basic.